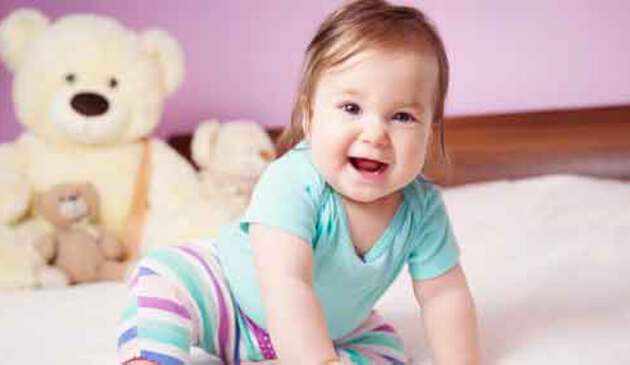 More than halfway through her first year of life, she's got teeth, is eating 'real' food and is even starting to form early words. It's amazing to think this time last year you'd probably not long ago had your first pregnancy scan.

Big changes are afoot this month. Lots of babies start to crawl at around seven months but don't panic if yours isn't one of them. Just be grateful for the relative peace while you aren't dashing after her every thirty seconds.

She'll experiment a bit first by getting up on her arms and knees, as well as doing a sort of 'parachute' pose, where she lies on her tummy with both arms and both legs held up in the air. She may start crawling by going backwards first and you'll see her looking pretty peeved by this while she works it all out.

This is also the month when her hands really come into their own. She may use them for clapping, or even to wave goodbye. But what's really impressive is that as well as being able to grab things with her whole hand, she's now also able to pick up small things between her thumb and forefinger. This fine motor skill is known as the pincer grip, and it's the first step towards being able to do things like write with a pencil (and pick up tiny pebbles from the floor and try to eat them).

Her tiny gnashers are probably starting to come through now. They usually come through in pairs, with the bottom middle pair arriving first, followed by the top two front teeth. You don't need to brush them properly yet but it's a good idea to give them a bit of a rub with a flannel until they're big enough to take a toothbrush to. They may be temporary but the enamel on baby teeth is far thinner than that on adult teeth so they do need some TLC. And keeping teeth clean is a good habit to get your child into as well.

How can I encourage my seven-month-old's physical development?

Keep putting toys just outside of her reach to encourage her to twist, turn and roll towards them. To encourage the pincer grip try putting small things like peas or raisins on her highchair tray for her to pick up.

At seven months old, your baby is really beginning to sort out the world and everything within it. She understands about object permanence (that things don't cease to exist when she can't see them) and this may kick-start separation anxiety, as she realises that you are somewhere else away from her when she can't actually clap eyes on you.

The way she learns about the world is through copying and repetition. Far from being bored by seeing the same thing happening over and over again, she will be thrilled to knock down the same tower of bricks 50 times in a row, and loves to hear familiar rhymes and stories. By this age, she can even anticipate what's coming next in a song or nursery rhyme she knows well.

However, don't be expecting everything to sink in just yet. You might well have told her not to chew your phone 20 times that morning, but she still can't remember things like this for more than a few minutes. There's not much point in trying to reason with a child this age – you're better off simply distracting her for now.

You might hear the odd 'mama' and 'dada' around now. She probably doesn't yet understand that that person is you, but it's a start.

She'll be combining made-up syllables into made-up 'words' now and you'll hear her happily chatting away to herself, or to her reflection, which she now understands is herself, using rising and falling tones, as if she knows exactly what she's babbling about.

How can I encourage my seven-month-old's brain development?

Try action rhymes that will help develop her memory, as well as games that involve lots of repetition of an action so she can work on anticipating what's coming next. It's hard to hold back, but sometimes, rather than rush to help her with whatever she is reaching for, just wait and let her see if she can do it by herself. 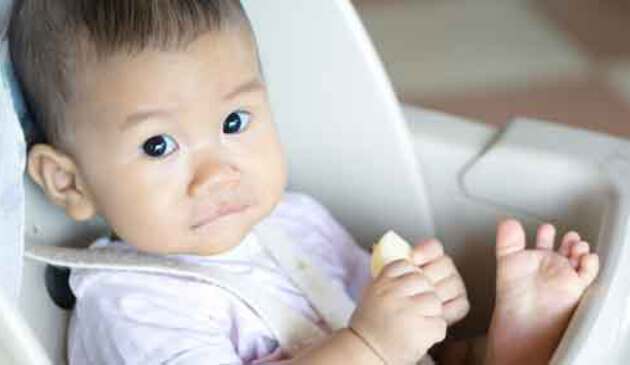 Games where things disappear and pop up again will still be popular as she is enjoying anticipating what's coming next and 'finding' objects that have disappeared from view. You could also try rolling a big ball towards her, while sitting on the floor together. She won't be able to roll it back to you for a good while yet but she'll be getting the idea.

What toys are good for a seven-month-old?

Shape sorters and colour sorters begin to be useful now as she starts to be able to work out how objects differ from each other. She enjoys copying your actions so now's a nice time to buy toys such as plastic chunky 'car keys' or a pretend phone. Stuffed toys are also popular at this time, now she's able to grab them and enjoy stroking their soft fur. If you notice she's getting particularly attached to one, do yourself a favour and rush out and buy two more, so you can keep them in rotation. The day you leave said toy in a hotel in Spain, your future self will thank you.

Read next: The 15 best baby toys for 6 to 12 month olds as tested by parents

By seven months of age your baby is likely to be doing some of the following:

She may also be doing some of the following:

What else happens when my baby is seven months old?

Weaning will be well underway by now and your baby should be trying a few different foods and working her way steadily towards three meals a day.

If she has a growth spurt around this time, you may find she temporarily picks up another feed, but it should settle down again once she's past the growth spurt. Babies of this age often get a bit clingy during a growth spurt, too, so don't panic if you're going back to work in the near future and suddenly seem to have a limpet on your hands. It may not be a permanent state of affairs.

"While I do think it’s good for them to learn to play on their own, at this young age it shouldn’t be for the majority of the time. Limit TV as much as possible – it quickly escalates as they get older."

"Sleep-wise, a good rule of thumb is that awake time is around two hours with a longer awake period before bed."

"My seven-month-old is very happy being in his jumperoo after his morning bottle, giving me a chance to go and get showered and dressed."

"I went back to work when my baby was this age, and it was great. I did miss her loads, but it was nice to get a bit of time to myself, too."

Your baby at eight months old

Your baby at nine months old