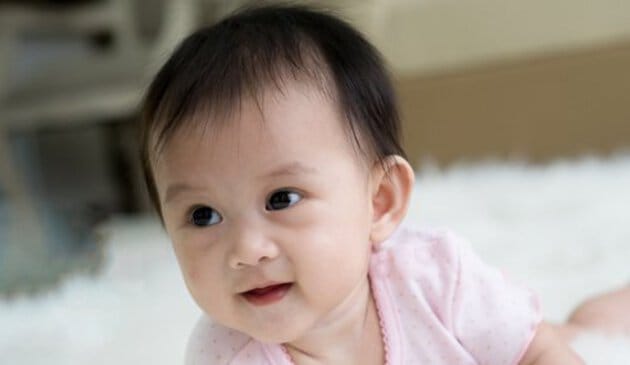 There's absolutely no doubt that she's much stronger and better coordinated than she was just a few short weeks ago.

Your five-month-old is developing good motor skills and may now be able to sit unaided for a short while, though you'll still need to prop her up with cushions and ensure there's nothing hard or sharp nearby she could hurt herself on when she eventually topples over.

Even more impressive is that she may actually be able to stand now, while holding onto the edge of the sofa or to you. She won't remain upright for long but will get enormous satisfaction from being vertical and getting a new view on the world.

She's also working on 'finer' motor skills, such as passing an object from one hand to the other.

What can my baby see at five months old?

Your baby's eyesight is getting quite impressive now. As well as being able to differentiate between different primary and 'bright' colours, by five months old she can also notice differences between paler, pastel shades. She's able to see and track quite small objects, too.

How can I encourage my five-month-old's physical development?

Mastering the physical skills needed to get on the move requires lots of practice to strengthen the right muscles, and there are many ways you can help your baby as she heads towards each milestone.

By five months your baby is really getting to grips with her emotions and starting to form relationships. As well as smiling at you, she's developing her own sense of humour and you'll find it's increasingly easy to make her laugh. Leave the knock knock jokes for now though – she's all about the raspberries and the slapstick at this age.

At the same time she's starting to have (and demonstrate) preferences for familiar people. She may hold her arms out to you to be picked up and even squeeze her arms around your neck for a hug. However, if you leave her with someone she doesn't know she's likely to let them know (loudly) that she's not keen.

She's adept at recognising voices and will turn towards familiar voices like yours when she hears them, but she'll also turn quickly if she hears a sound she hasn't come across before, particularly loud noises like ambulance sirens and hand dryers. She is beginning to recognise her own name and may look up when you say it.

A subtle but important change at this time is her brain's ability to fill in gaps and process things she isn't actually looking at. So when she drops a toy now, she will briefly look around for it. She won't yet understand that even though she can't see it under the table, that it's still there, but that's coming soon.

She can also recognise an object even when she can only see part of it. So if you hide a favourite toy under a blanket and just leave part of it sticking out, she'll realise what it is and be delighted with herself when she pulls it out and confirms her own suspicions.

Can a five-month-old baby talk?

She continues to make lots of noises – raspberries tend to be a big favourite at five months old – but the most noticeable thing this month is that she starts to really copy noises she hears you say. And suddenly a whole new world opens up before her.

It's just a few short steps from repeating simple sounds to forming whole words and understanding what they refer to.

How can I encourage my five-month-old's brain development?

Help her on her way to understanding object permanence (that stuff is still there when you can't see it) by playing lots of peekaboo and hide-and-seek games. You can 'hide' a toy so it's only just visible and let her 'spot' it or hide your face under a blanket but keep on talking so she can still hear your voice.

Games that involve things being hidden and revealed are good. Some early lift-the-flap board books should appeal. Babies of five months or so also seem to enjoy toys that fall over and stand back up again, like Weebles. For some reason this is the funniest joke in the world when you're five months.

Tummy time is still important as she moves slowly towards crawling, as it gives her the space to use the leg and arm muscles her will need. You'll notice she's much more steady now when she lifts herself up on her arms to look around.

What toys are good for a five-month-old?

Anything that can be easily wiped down and disinfected! She explores the world by putting things in her mouth because her mouth has more nerve endings per square centimetre than any other area of the body.

That does mean that everything gets covered in a fine layer of dribble now, so a good wash is an idea at the end of the day – particularly if she's had a baby friend over swapping bodily fluids.

By five months your baby will probably be doing some of the following:

She may also be doing some of the following:

What else happens when my baby is five months old?

Now your baby will probably be down to just two naps a day, though many will have just one or even three. Most babies of five months have a nap in the morning and another in the afternoon. She will be having a good long sleep at night, too, fingers crossed, and is able to sleep up to 10 or 11 hours a night. That doesn't mean she will sleep that long, though. Just that she could. Don't get your hopes up!

You'll be feeding your baby round about every four hours still, though she may now go through the night without a feed with just a late-night top-up.

Babies of five months are often showing an interest in food. This is a great sign but it doesn't mean you have to crack and start her on solids. If possible it's best to wait until your child is six months to start weaning.

Most babies start teething at around six months but you may well start to notice teething signs at five months old.

"At five months old my daughter had reflux, so I carried her in a sling quite a lot of the time and found that it helped".

"My policy now is just to do whatever she wants. I'm not really that bothered about having a routine as we've worked the days out gradually and I'm hoping that the evenings will just work themselves out naturally".

"Soon you won't be able to leave her alone for a minute as she'll be zooming off crawling and making you laugh with all sorts of things".