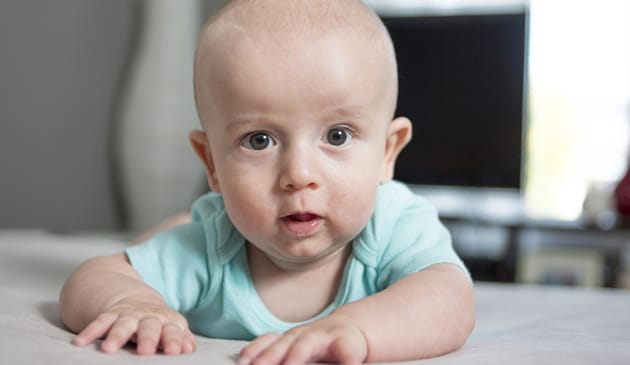 She's continuing to grow in size and strength and is much more steady in her movements than she was. If you gently pull her up from a lying to a sitting position, she could keep her own head straight the whole way, and may even sit unaided for a few seconds at a time.

When she has tummy time now, she may try to arch her back by pushing up on her arms – a sort of baby planking session. This will help exercise the muscles she will soon need for crawling. She may also use her arms to push herself all the way over onto her back.

How much can a four-month-old see?

Can a four-month-old baby talk?

Listen carefully and you may just hear her starting to form some first words. She probably doesn't understand them yet but will copy noises you make, so you may hear her say “boo!” back to you when you're playing peekaboo.

Note that if you spend hours a day repeatedly saying “Mumumumumumum” inches from her face while beaming manically at her, she probably will eventually say “mumma” back but that doesn't make her a genius. She is just mimicking.

She's definitely starting to make the noises that eventually form words though and is even using those sounds to communicate. When she's unhappy about something you might hear lots of 'p' and 'b' noises, whereas if she's excited or happy she'll make squeaky 'k' and 'j' noises.

How can I encourage my four-month-old's physical development?

Now's a good time to try and interest her in music, either with some chunky instruments at home like a baby drum kit, maracas or a xylophone, or even at a baby music class where she can mix with some other babies her age as well as enjoy the songs and tunes.

Toys like lightweight rattles that make a sound but can be grabbed easily will help develop her motor skills, too.

Your four-month-old is starting to understand cause and effect. If she shakes a rattle, it makes a noise; if she kicks in her bouncy chair, the chair moves. And eventually (though not for some time yet), if she chucks things on the floor, you'll pick them up again. That's a game that she won't tire of quickly.

How can I encourage my four-month-old's brain development?

You can help her understand cause and effect by offering her lots of things to test out her theories on. Every time she picks something up she will be learning something about it, whether it's the way a certain fabric feels or the noise it makes, or simply that it doesn't taste nice when you put it in your mouth (not that that is likely to stop her). So put lots of safe objects in her path – and make sure anything that shouldn't go in her mouth is safely locked away.

She enjoys playing with her hands and feet at this age and will happily pass a few minutes on the play mat, grabbing at her toes and clutching her hands together in front of her chest.

She'll start to slowly take an interest in other babies so now is a good time to try out some new classes or baby groups where she can experience a new environment as well as a few peers to get to know.

What toys are good for a four-month-old?

If you're buying toys, this is a good time for a first activity centre, with chunky buttons that make noises and cause things to light up. She might have trouble with the buttons for a little while yet but you can help her for now and when she sees what they do she'll have plenty of incentive to keep jabbing at them.

By four months your baby will probably be doing some of the following:

She also may do some of the following:

What else happens when my baby is four months old?

Your four-month-old may well be sleeping much better now, with a good long stretch at night time, and staying awake for longer periods during the day. She will also be smiling more and responding both to you and other familiar faces, as well as to 'inert' stimuli that she just likes the look of.

Could my four-month-old be teething?

It's possible. Teeth usually arrive at around six months but any time from now you might see her furiously rubbing at her gums and chewing on her fist.

How often should a baby be feeding at four months?

You might notice that she feeds less from now on, but she will continue to gain weight as before. Her stomach has got much bigger so she's able to take in more milk at a feed and consequently doesn't need to top up quite so often. She'll probably be on four to five feeds a day by now.

Can you start weaning at four months?

It's best to wait until the recommended six months to wean onto solids. People are often confused by this because the recommended age was four months for some time. However, it's now thought to be safer and healthier for your baby to wait.

By six months they will be less likely to pick up a bug from food, less likely to have an allergic reaction and more able to sit up unaided in a highchair, which reduces the chances of them choking.

This is a good time to start thinking about it though – whether you want to do spoon-feeding or baby-led weaning, what equipment you may need, and which foods you might start with.

If you're really intent on starting weaning now, do talk to your health visitor first as there are some foods that are unsafe for babies under six months.

"My baby is 16 weeks. We have a loose pattern most days but certainly not a ‘routine’".

"Get a sling, strap her to you and get on with your life. It's a bit awkward but my friend even mastered the art of mucking out stables and grooming horses with a clingy baby in a sling".

"At night we start a routine between 6-7pm. Bath, change, a story, feed, and then he usually falls asleep around 8pm".