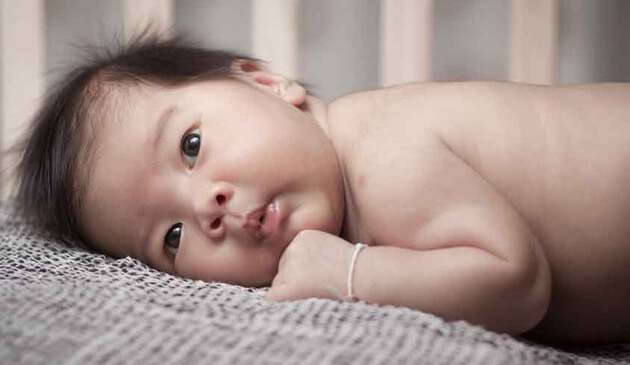 If you pull her up to sitting, her head (which still seems far too big for her body) will lag behind a little but not completely. Once in a sitting position she can keep her head nice and steady. She can also keep her head steadily raised when she is lying on her front but not for long – and she may then let it fall with a bit of a thud, so make sure she's lying on something padded.

If she supports herself on her forearms, she can move her head around quite effectively to see what's going on. And when lying on her front, she may make crawling movements, moving the arm and leg on the same side of her body, like one-sided swimming.

Somewhere between two and four months, she will roll over from her tummy onto her back (usually the one time you leave her in a precarious position – so think carefully about where you leave her from now).

Babies usually roll tummy to back first as they can use their arms to push themselves over, and it might be a few months yet before she can get from her back onto her tummy.

Her hands are often closed but she will grip objects such as a rattle, wave it for a little bit and then drop it unintentionally. She's haphazard at reaching for and holding things so will overshoot when she reaches out to grab something but is now having a fine old try.

She'll lie on her back and watch her hands and fingers wave in front of her eyes as though they have nothing to do with her. She's beginning to learn that there is a world outside of her that she can swipe at, although she'll miss initially.

You may also notice that she's able to bring her hands together in front of her, in the manner of a Bond villain. Mwahahahahaha…

What can my baby see at three months old?

She knows when things look familiar by now. She's no longer crazy about abstract edges on objects but has moved on to an appreciation of the human face with its eyes, mouth and nose. Unless your family snapshots are fuzzy, she will recognise your face from a photograph by four months.

Studies show that babies have some perception of depth, too. This is nature's way of ensuring they are protected before they become mobile. But it's not to be trusted – watch as your baby tries to hurl herself off your bed.

How much can my baby hear at three months?

Between three-and-a-half to five months, she will turn her head in the direction of your speech. This is because the parietal lobe of her brain (the part that recognises familiar objects) and the temporal lobe (which deals with sounds, smells and language) are both developing now, enabling her to recognise and even respond to your voice.

Can my three-month-old talk?

She starts to make a few vowel sounds around now, such as 'ah' and 'oh' and even starts to have some tone to the noises she makes. You might be able to tell from the sounds if she is happy, sad or frustrated.

How can I encourage my three-month-old's physical development?

Put toys by her side while she's on her tummy on a play mat to encourage her to inch towards them to grab them, and provide lots of toys with different textures for her to explore and enjoy. When she makes noises, reply as often as you can and try and look totally delighted with her to encourage her to keep up a babbly 'conversation' with you.

She is curious about the world and will look carefully at objects to assess what they can do. However, when she drops a toy out of sight, it is dead to her, she won't bother to look for it. Babies at this age have no idea of permanence. If they can't see it, it doesn't exist. To an extent that's how they think of you, too. Only between six and nine months will she start to look for things once they have been dropped or removed.

She is much more responsive to you though (and not before time) and her arms and legs will wave endearingly when you talk to her, and she'll stop crying if you pick her up, which is a big relief. Around now she will also start to smile at people other than you, much to her grandparents' delight.

Your baby's big discovery this week is her hands. She may not yet understand that they are hers but she is beginning to have a sense of cause and effect and learning that she can use her hands to move things. This stage coincides with her sense of touch improving so she will use her hands to explore lots of textures around now.

How can I encourage my three-month-old's brain development?

She'll enjoy being read to and simply hearing your voice, so try to keep up a gentle running commentary as you go about your day. Loading the washing machine might seem boring to you but she will love hearing all about it, and make time for a short story at bedtime.

Play gets more interesting now, with pat-a-cake and peek-a-boo both on the menu. She loves tickle games and nursery rhymes and kicking and splashing in the bath.

What toys are good for a three-month-old?

It's worth stocking up on a few more toys, particularly things with different textures to explore like crinkly fabric, fake fur, velvet and shiny material. Now is not the time to buy anything sophisticated, though: The Hornby train set comes much later.

By three months your baby will probably be doing some of the following:

She may also be able to do some of the following:

What else happens when my baby is three months old?

Her sleep pattern should be much more reliable by now, with her sleeping through large chunks of the night. Remember 'sleeping through' only really means six hours at a stretch so don't raise your expectations too high. Most babies will still wake for a night feed for several months to come.

When does my baby have her second set of vaccinations?

Hot on the heels of the eight-week jabs, there's a booster for the 5-in-1 and rotavirus vaccinations at 12 weeks old.

If your baby was born premature, she will still have her vaccinations this week rather than at her 'corrected' age. Because prem babies’ immune systems are less mature, it's even more important that they are protected against childhood diseases.

"I put my baby in her bouncer and bring her into the kitchen with me when I want to get some chores done. Then I make up silly songs to narrate what I'm doing, and I usually manage to get the dishes done at least".

"Get a sling, then you have two hands free for dinner prep".

"Initially it was easier to keep my babies close in the evenings, but around three months I started to notice that they were awake the whole time and disturbed/grumpy. I realised that they needed to start going to bed and doing the full bedtime routine".