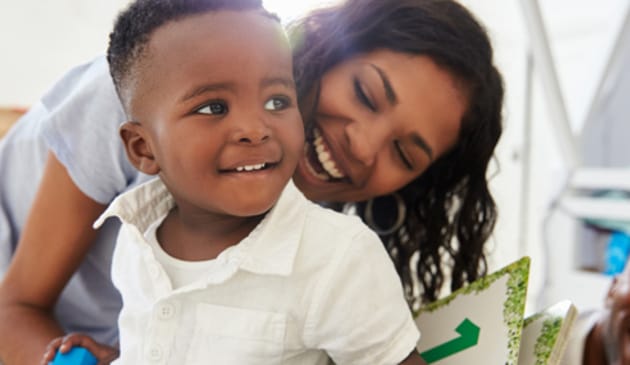 By 18 months your child is probably walking with some confidence. She's steady on her feet and is quite adventurous, enjoying climbing on the furniture and scrambling all over the sofa cushions. She will, however, still need help when going up stairs and probably goes up crawling on her hands and knees and comes down backwards. This is the safest way to do it really, so try and encourage her to always do this, or at least to sit down on her bottom and come down one stair at a time.

As well as finding her feet, she may well have found her wheels and enjoy riding on a trike or other ride-on toy. If you show her how to kick a ball, she will have a good bash at that, too, though she may well miss completely the first few times and won't yet be able to direct the ball exactly where she wants it.

She's also much more dextrous than she was, and can use crayons or pens to make big sweeping marks on a page, as well as using finer movements to do finger painting. She can hold her own cup and drink from it without upending it, too. Hallelujah.

How can I encourage my 18-month-old's physical development?

The main thing you can do at this age is simply to keep your child active as much as possible. So if you're going out and there won't be too much walking involved, leave the buggy at home. When she's walking she's not only burning up energy and strengthening muscles, but also discovering the world around her at her own pace.

If it's rainy and you can't get outside, put some music on and encourage her to dance around the kitchen with you. She'll love having a little bop. Try not to let her spot you laughing at her moves (usually feet glued to floor, while she wiggles her bottom).

She has a real sense of self by 18 months old. By now she not only recognises her own reflection in the mirror, but also knows that she is her own person, rather than simply an extension of you. Brace yourself for all that free will to be exercised very soon.

But for all her striking a blow as Miss Independence, she's acutely aware of how much she still likes you to be close. In fact it's precisely this understanding that she's a separate person to you that leads to separation anxiety, which tends to peak at around 14-18 months. You might find that she becomes upset when you leave her somewhere – whether that be nursery, her grandparents' house, or just in the kitchen while you pop to the loo! It can feel pretty exhausting but this phase (like all phases) will pass. Whatever you do, don't just 'sneak off' when she's not looking, or she'll cling to you even more the next time. Say a cheery goodbye, say 'Mummy will be back soon', give her a kiss and go. (Unless you are just going to the loo, in which case you can probably do a pared-back version of this).

If she's having trouble settling when she's away from you, at nursery for example, ask about whether she can take a comfort toy with her, or even something that has your scent on, like a scarf or T-shirt, that will make her feel as though you're close by.

Despite the ups and downs of the early toddler years, you start to feel like you get a lot back from your little one at this age. She will be very keen to please you and other adults that care for her, making you endless cups of pretend tea, and giving cuddles to cheer you up if she thinks you're sad. She can follow more complicated instructions than she could six months ago and, when she does, shower her with praise and watch her bask in the glow of a job well done!

How much should my 18-month-old be talking?

By 18 months old she will know somewhere between six and 20 words, but on average around 15. However, it's worth remembering that she actually understands about 10 times more than she is able to put into words herself.

More impressive still is that she is able to string two or more words together to make sentences. Don't expect anything Dickensesque just yet, but you might hear her say 'all gone' or 'get down' around now.

She will probably avoid using pronouns, as these are quite complex, and will say: 'Mummy carry me' rather than 'you carry me'. She'll also refer to herself in the third person (rather like David Bowie), telling you 'Jess want it' rather than 'I want it'. All this has the effect of making you feel as though you are starring in the film of your own life being narrated by a toddler, which is quite good fun really. If her speech isn't completely clear don't worry at this stage – that often comes later.

How can I encourage my 18-month-old's brain development?

Messy play is a great way to encourage cognitive development because it allows them to use several of their senses at once. Letting her squish jelly and dig toys out of it might seem like a waste of time (and good jelly) to you, but experiencing the sight, sound, touch, smell and feel of it all at once is doing amazing things in her brain. At the same time, she's also experimenting with cause and effect and learning about the properties of different substances, as well as exercising her hands. It's all good stuff. Although (sssshhh) no one will tell on you if you keep your house nice and clean and instead take your child to the nearest toddler group with messy play and let them deal with the fallout instead.

Play and activities at 18 months old

At this stage your toddler is still playing 'alongside' other children, rather than 'with' them, in what's known as 'parallel play'. This is perfectly normal and she'll be perfectly happy engaged in parallel play so you don't need to worry that she's lonely or not making friends just yet. Children don't tend to play properly with peers until around the age of three.

Having said that, now's a good time to invite other people with children of a similar age over to play so she can start to get used to the idea of sharing and socialising. Children are often intrigued by other toddlers but have no idea what to do with them. Not all interactions are positive and you'll be lucky if you escape this stage without your child doing something beastly and cold-bloodedly violent to another child at least once. Often, it's a dispute over an object and she may pull the object brutally without even looking at the child. She may even bite and kick in anger.

While laughing it off will mean an automatic ban from playgroups and nurseries within a 100km radius, good old Doctor Spock is clear that biting and kicking are not a heinous crime as long as it's not habitual. You should tell your child off firmly but not hysterically, although she won't really understand what all the fuss is about.

Her deterrent will be that the behaviour made you, her lovely parent, upset. Don't think less of your child – we're not genetically programmed to be reasonable when someone has a toy we want more than anything else in the world.

Just occasionally she and a fellow toddler may impress you by looking up and noticing each other and even playing the same 'game' at the same time alongside each other.

What toys are good at 18 months old?

Simple jigsaw puzzles are good for this age, also colouring books and anything that gets them used to holding a pencil.

She'll enjoy pulling and pushing toys, walker toys than she can sit on and move with her feet, water play (sticking her chubby hand into your glass of diet coke), big crayons and pencils she can poke her eye out with, and books.

She will love singing and nursery rhymes and may be able to play some fantasy games, too, like pretending to be dragons – this is a step on, you'll note, from simple role play such as pretending to be Mummy.

By the time your child is 18 months old she will probably be doing most of the following:

What else happens when my child is 18 months old?

It's possible that she may start to show signs that she's ready to start potty training. Signs to look out for include being aware that they are doing a wee (or more likely a poo) – a far-away look in their eye is a killer sign, as is going to hide behind the sofa to do it. Also, an interest in you going to the loo and wanting to follow you in and see what's going on.

Remember though that they may not be ready for some months – possibly much more than a year, and many parents wait until around their child's third birthday. The key is to wait until they're ready so by all means buy a potty now and leave it casually in the bathroom, but it's not something that is worth pushing. Unless you like scrubbing poo off carpets, of course.

"When they throw a strop, I found taking my daughter outside/away until she calmed down worked wonders. Definitely don't let it stop you taking your baby out – they need to learn how to behave in different situations, and most people are pretty understanding".

"I find the key is to keep mine really busy. It's exhausting but I find his patience is a lot shorter at home than when we’re out and about. We usually play in the garden, take a trip to the park, or go on a long welly walk on any day when the weather isn't horrendous. Fresh air is a definite winner and there's a lot to look at outside".