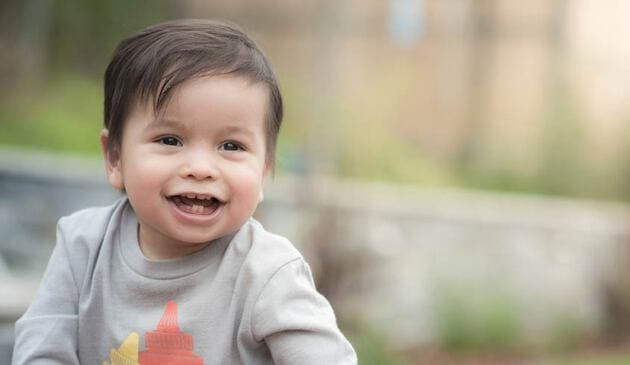 Hitting a year makes her suddenly seem so grown up. It's not long ago you were still counting her age in weeks. Now you have a one-year-old. She's stronger, noisier and generally more boisterous than before. Good luck!

The most exciting news this month is that your baby could be walking any day. Some start as early as nine or 10 months, but the average age is 13 months. When she takes her first steps, her feet will probably turn out and she might walk on tippy toes. This will all eventually right itself as she gets used to being vertical.

If your baby isn't walking in the next few weeks, though, there's no need to worry. Many children don't walk for some months yet, and this is perfectly normal. It's often the case that babies who were champion crawlers or bottom-shufflers feel less inclined to walk. Well, you would, wouldn't you?

Her ability to pick things up is pretty masterful by now. She has a fine pincer grip, and can use her thumb and forefinger to pick up things as small as 5p pieces – and anything else likely to lodge in her windpipe. Now's the time to become obsessed with checking what's on the floor and what money has fallen between the sofa cushions from someone's pockets.

She will use her grip to pick up and throw her toys with one hand, often with some force, so get ready to duck or to weep. She may also be able to draw a line with a crayon, which (of course) counts as her first drawing.

Mealtimes are getting interesting; she can feed herself by picking things up with her forefinger and thumb and also likes using a spoon, although the food-to-mouth ratio may not be 100%. But she will rapidly get better at feeding herself and you should let her try. It might seem counter-intuitive to keeping clean walls but if you don't she will most certainly yank the spoon out of your hand, causing yoghurt to fly onto your eyebrows. She will still enjoy putting her bowl over her head and wiping food in her hair but that's pretty much at the top of the job description for Being A 12-Month-Old.

Now she's got more teeth, and may even have molars, she'll be more adept at chewing and should manage to eat a piece of her first birthday cake, unless it's one with concrete-hard royal icing.

How much weight should my baby have gained by 12 months?

By the time she hits the end of her first year, your baby is likely to have grown an average of 25cm since birth and have doubled or even tripled in weight.

As she becomes more mobile you'll find there are dips in her weight chart as she is using up more calories moving about, but there will also be peaks in her weight gain as she goes through growth spurts and feeds more often. If you look back over the year at the growth charts in her red book you'll see it was a bit of a wobbly line but as long as she basically tracks along the same centile line she was born on and doesn't drop or rise too many lines above or below, she's fine.

If you've any concerns about the rate at which she is gaining weight have a chat with your health visitor for reassurance.

Does my baby still need milk at 12 months old?

She doesn't 'need' it but most babies continue having one or more milk feeds into toddlerhood. If you're still breastfeeding (sterling work there, well done), it's actually recommended by the World Health Organisation that you continue to two years or more to maximise the benefits of breastmilk.

However, most of your baby's calories now come from her food so if you want to drop the feeds, you can do that and move over to cow's milk. Follow-on type milks are available but aren't a necessity. Cow's milk as a drink should be full-fat until they are two years old (they need the calories) and milk served as a drink should really be in a cup now as bottles allow liquid to pool around the teeth, which can eventually cause decay. Obviously the cup thing doesn't apply to breastfeeding. That would be making work for oneself, really.

How can I encourage my 12-month-old's physical development?

If she's on the verge of taking steps you can do a bit of (back-breaking) walking her around holding her by the hands from above.

When she's standing up at the sofa, put a favourite toy a little way along so she has to take a few steps, holding onto the cushions, to retrieve it.

Since birth, her brain has doubled in volume and is already 60% the size of an adult brain. Sometimes you'll catch her looking at you before she does something – like sticking her fingers in the DVD player – to check it's OK. There's no point looking disapproving as she'll do it anyway and laugh because it's become a game – try to simply distract her instead.

However, she is definitely getting the hang of life and starts using objects the way they were designed to be used, miraculously using a brush on her hair and even trying to brush yours (rather more relentlessly). She'll love to copy what you do, so for heaven's sake don't let her catch you hoiking toast out of the toaster with a knife or anything. On the other hand, give her a duster and let her follow you around the house 'cleaning' and you might get sparkling skirting boards for free.

Having mastered cause-and-effect some time ago, she's experimenting hard now, working out more complex ways to make things happen. She'll pull the tablecloth to get hold of her beaker, for example.

Her memory is improving, allowing her to anticipate events more easily. So instead of the end of This Little Piggy being a constant surprise, she will remember how it ends and start giggling before you get to tickle her under the chin.

All in all, she's becoming a more complex character, capable of doing more than one thing at a time. She can remember where the cupboard is, where the crayons are kept, crawl or walk to it, open it and find the crayons. What else she does while she's in there doesn't bear thinking about.

She may be able to say one or more words with meaning – so, she'll point to a dog and say 'dog'. By this, she means. 'There's a dog', rather than just 'dog' so try and join in with the conversation whenever you can – 'Yes! He’s a very lovely/fluffy/mangy dog isn't he?'

By now, she is able to understand simple instructions, such as 'Can you get your shoes?', and occasionally will follow up by actually doing so..

How can I encourage my 12-month-old's brain development?

Keep chatting away to her as she's on the cusp of a burst of language development at this age. You can count stairs as you go up them with her or point out the colours of cars as they pass by. If you think you might have a child genius on your hands you can try giving her choices that require recognising and attempting a word: 'Do you want one rice cake or two?'; 'Would you like the red bowl or the blue one?' Even if you aren't sure what she's babbling about when she replies, try and answer with the right inflection or simply shower her with praise.

At this age, it's lovely if you can manage to have some family meals all together around the table. Not only does it allow her to get used to the whole experience and see you all sharing food, and saying your pleases and thank yous, she also is able to see all your faces as you talk to each other – it's a brilliant opportunity to learn lots of new words.

Play and activities at 12 months old

Your one-year-old is much more boisterous than she was and probably enjoys noisier, more 'active' play now. She likes physical games like being bounced on your knee while you pretend to drop her. Nursery rhymes and that old favourite Incy Wincy Spider are fun for her, too.

But she is a fan of quieter play, too, and will enjoy books, especially ones with babies in. She may well say 'Baba' in a rather superior voice when she sees one. She's all grown-up now, you know.

She will laugh at people, especially children doing 'funny' things such as waving their arms about or hopping.

Building towers of bricks is easier for her and she may manage three, although she still prefers knocking them down. She's still heavily into stacking stuff and putting objects in and out of containers because she is busy learning about the relationships between things and how one thing compares to and works with another.

What toys are good for a 12-month-old?

Books with babies in, such as Peepo! by Janet and Allan Ahlberg and Heads, Shoulders, Knees and Toes by Annie Kubler will appeal at this age. In terms of toys, chunky crayons for indoors, or chalks for outdoors are great. Play tunnels and tents encourage crawling and toddling and she'll love 'hiding' from you in there. Toys that require her to push them along the floor and move with them, like a big truck or anything on wheels will encourage mobility as she can't use both hands to crawl alongside it, so she'll be strengthening her legs and moving from a crawl to a walk as she plays.

By the time your baby is 12 months old she will probably be doing most of the following:

What else happens when my baby is 12 months old?

She's probably dropped down to one nap a day by now but you may be finding it difficult to get her down even for that one, and bedtimes can suddenly become a trial again at this age.

Don't panic though – this is very common at this time, when your baby is learning lots of new things, particularly that she can stand up in her cot. You may find she's automatically standing up when she wakes and then cries because she simply doesn't know how to sit back down again.

You can help steer her back towards better sleep by going in hard on the routine. Go back to whatever has worked in the past – perhaps a bath, story, cuddle and bed, and before naps try winding her down with some quiet play and putting her down to sleep in the same place she sleeps at night time.

"My 12-month-old is mad for corn on the cob, she sits there happily gnawing away for ages!"

"When my first son was 12 months old he was walking confidently and sleeping through the night – making me that smug mother who thought she was doing everything right. When son number two came along, however, he crawled everywhere and didn’t sleep through the night until he was five years old".

"Mine eats with his hands and can use a spoon for easier things like yoghurt, but that's a very recent development".