Confused about car seat regulations? Read our reviews of baby car seats, toddler car seats and booster seats to find out which ones are worth investing in.

Confused about car seat regulations? Read our reviews of baby car seats, toddler car seats and booster seats to find out which ones are worth investing in.

Hi guys
I’m already 8 and a half months pregnant and it seems like I have spent an age trying to get my head around car seats / buggies and prams and so I still haven't bought one! It all seems much too confusing and none of the sales websites seem to give specific details on what is compatible with what / what comes with what! I am simply far too confused by it all and urgently need your help!!

Specifically, my question is: do you know if Maxicosi Isofix bases are compatible only with Maxicosi car seats and likewise any other make being only compatible with their own brand? I am assuming that they are and that this therefore means if I were to buy a Maxicosi Isofix base, then I would be limited to ensuring a Maxicosi car seat is bought each time my child needs an upgrade to a bigger size car seat (up to the age of 12). What do you think?

Also, if this is the case, which is the best make to go for that will last without the need to buy a different make Isofix base for future use?

Many thanks in advance! :)

I don't blame you, it is a bit confusing! It doesn't help that there are two sets of legislation for car seat approval running side by side at the moment, meaning the age categories are a bit scrambled and some seats go on weight while others go by height.

First off it might be useful to have an overview of the three different stages of car seat you'll generally need:

Carry car seats, always rear facing, which are generally compatible with a travel system. You can get compatible isofix bases for most of these seats, almost always sold separately, but most of them can be fitted into the car with a seatbelt too, which means you don't necessarily need a base at all if you don't want one. However, many people prefer to have a base for the convenience of clicking in and out. Without a base, you would have to do the seatbelt every time.

These seats usually have an integrated harness and can be rear or forward facing. Some can do both. They come in two sizes: Up to 105cm/18kg (3-4 years) or up to 25kg (about 125cm/5-7 years). Some go onto isofix bases, some have the isofix built in so you don't need a base, and some don't use isofix at all (fit with seatbelt, but one time installation, not every time). This is the most complicated seat group/stage so I'll elaborate more later.

High backed booster seats using the adult seatbelt to restrain the child until they are 135cm tall or 12 years old, whichever comes first. You definitely don't want to move into a high backed booster before at least age 3, and some recommend age 4 or 5 as a better minimum age due to bone development, not to mention behaviour (they need to be mature enough not to try and escape) or recommend to delay this step for as long as possible, by using a 25kg harnessed and/or rear facing seat. Booster seats don't go onto isofix bases ever. Some of them have isofix arms which just fold away if you need to use them in a car without isofix. So you can ignore this step in your decision making entirely :)

Isofix bases - OK - so yes, you're correct that a Maxi Cosi seat will require a Maxi Cosi base, a Britax seat a Britax base etc. In many cases this is even more specific and only Britax base Model A will take Britax car seat Model A and not Model B or C etc. Maxi Cosi is a bit of an outlier here, as they have a very complicated array of seats and bases for compatibility, and even their website is not very clear as they simply try to push their latest and most expensive base. Best way to check is usually to go to a retailer stocking the seats and bases in person and ask them, as they usually know/have the most up to date list. The full table is a bit hard to find on the web - hopefully my upload works. It might be too blurry, in which case I'll try to send the link instead (but it's all in Dutch!)

Luckily pushchair adapters are far less fussy! The vast majority of brands of baby seat will go onto the same (Maxi Cosi/universal) pushchair-car seat adapters. Britax, Graco, Cosatto, generic/own brand use different ones, to go by the most popular alternatives.

For toddler seats - yes, some of them go onto isofix bases. What is quite popular in the car seat business at the moment is to have what they call a "modular" system so that the infant and toddler (up to 18kg) seat go onto the same isofix base. IMO - this is a bit of a marketing trick as they essentially want to keep you as the parent of a newborn as their customer for the purchase of the next seat as well. The idea is that because you have the base, you'll automatically look only at their compatible range, and not at other seats. It also seems to justify them charging huge amounts for the base because they claim that you are saving money as you won't need another one.

However - this is not as useful/true as it may seem for a number of reasons. 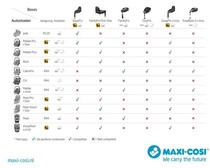 That was so useful Bertiebotts

Yes only maxi Cosi bases work with maxi Cosi seats (etc) and you often need a specific vase for specific seat as well.

But only the infant carriers are the ones that need a base. The rest you aren't taking in and out of the car all the time. The second stage one that you strap them in with integral straps stays in the car and the last stage which is a booster seat with back sits lower in the car and didn't need a base either.

The Isofix is either built into the seat or you just strap it in using the seatbelt. No base needed.

What you'll find when shopping for seats is that the shops will say ooh but look at this seat because the base also takes a toddler seat as well! But it's a bit of a marketing con because you can then only buy that one specific seat. And all the others you can buy don't need a base so you're not saving any money anyway

sometimes the modular seats that go on the super expensive modular base costs more than just buying a normal standalone seat! It's crazy.

I was just thinking who has written such a giant wall of text, nobody will ever read it, and it was me

That will teach me to RTFT (and check for zombies!)