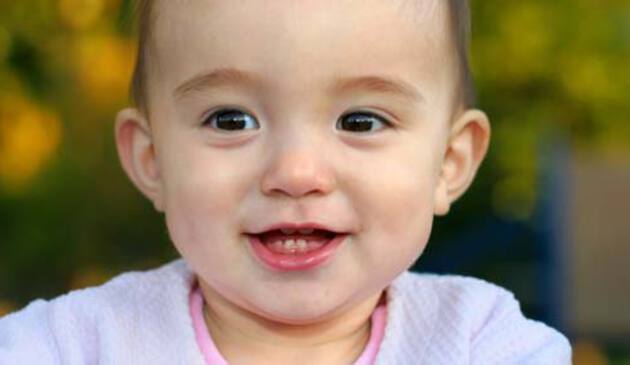 She's got lots of new tricks up her sleeve and you'll get a chance to show these off to your health visitor at your baby's developmental check around this time. No hothousing, now – they'll know if you've been helping her cram The Very Hungry Caterpillar the night before.

As well as being able to stand briefly without support, your child might be stooping and squatting from a standing position. You never know – maybe she'll start bending down to retrieve some of those toys she's been chucking on the floor for the last few months… Or maybe not.

She might also be able to walk a few steps while holding onto your hand. We say 'walk' – it's probably more of an exercise in hazard-avoidance at this stage, as she swings and dangles from your hand with her legs collapsing beneath her every few steps. If you happen to pass a sharp corner or stretch of open water, be sure she will nose-dive suddenly and brutally towards it.

Still, it's a step towards independence. And she's making plenty of those currently. By 11 months she might be using a cup by herself and even refusing to take a spoon from you, preferring to do it herself (or at least stick it in her ear herself). She may also hold out a chubby arm or leg for you when you're putting her clothes on her. Which is a nice gesture after all you've done for her. About time she started pulling her weight.

You'll find she's pushing for more independence physically all the time this month and is much more wriggly about everyday tasks that involve her being restricted in any way, like having her nappy changed or being strapped into the buggy.

If you're feeling as though your baby lurches from one cold to another at the moment, you're probably not wrong. Her immune system, while improving all the time, is still weaker than yours and so she's likely to pick up every bug she comes into contact with, especially if she's recently started at nursery where there is a whole raft of infections she's not yet come across, just waiting to get acquainted with her. Breastfeeding for as long as possible will help to improve her immune system, but there's really not a whole lot more you can do, other than treat the symptoms of coughs and colds and ride it out.

How can I encourage my 11-month-old's physical development?

You can help her develop manual strength by giving her hand and finger puppets to play with. These will exercise the muscles in that area, which she will one day need for writing. Other messy play that encourages her to squish, squeeze and generally manhandle different objects and textures is also helpful.

In general though, what she wants your help with now with is independence, so let her try out walking and standing up as much as you can, supporting her when needed and allowing her to lead the way when it is safe to do so.

There's much more going on inside her brain now than she lets on. Though she might be speaking only a small handful of words (if that) she understands a great deal and can even follow an easy instruction such as 'Give Mummy the toy', particularly if you use gestures and mimes to show her what you mean. Try to keep commands simple: 'Stop pulling the cat's tail and come and have your nappy changed instead' will likely draw blank looks. Stick to one instruction at a time.

As she gets to grips with the fact that she has her own free will and can even assert it, you might find you're running into lots of battles that can escalate fast. When she objects to something, it's helpful (for your own sanity) to bear in mind that all she's doing is practising making choices. Take a deep breath and, where possible, offer her two choices. So if the green sippy cup has suddenly become anathema to her, offer her a choice of that one or the orange one.

If it's a situation where no other option is available, you might have to distract her. Not wearing her straps in her car seat isn't really negotiable, so try peering out of the opposite window and exclaiming: 'Look! A camel!' instead.

Most babies' first words are either 'Mama' or 'Dada'. The more popular by a long chalk is 'Dada', simply because 'd' is easier to say than 'm' – a good one to tell Dad if he starts celebrating this victory in the popularity contest.

Some babies of this age can also say the odd additional word or two, so listen carefully for your baby using the same sounds to describe the same thing, even if she's not yet getting it quite right. And stop swearing when you're in the car.

She's getting to grips with some of the subtleties of language now and can use tone and inflection effectively to convey meaning, as well as simply parroting words.

How can I encourage my 11-month-old's brain development?

Helping her to get to grips with her independence is what it's all about. She's likely to be into everything by now and understands 'no', even if she doesn't always act on it. While she's too young still to know right from wrong, she is old enough to begin learning about it, so gently explain why it hurts to pull your hair and encourage her to use 'gentle hands' instead. There's an awful lot for her to take in, though, so try to keep 'no' for life-and-death situations such as touching the oven, rather than hurling blocks onto the floor from her highchair. Apart from anything, you'll be sick of the sound of your own voice pretty quickly if you pick her up on every last transgression.

When she talks, babble back to her, which will help her to master the art of conversation. Plus it's only polite to sound as though you're listening, isn't it?

Play and activities at 11 months old

Rhyming games like pat-a-cake and heads, shoulders knees and toes will help improve her memory skills at this age.

She'll still be enjoying exploring textures so any sort of messy play will go down well, whether it’s 'painting', playing with sand or fishing fruit pieces out of jelly.

Try to keep up a bedtime story every night. If you're getting fed up with the same old stories every night, get your baby a library card so you can borrow lots of books and change them every week. Most libraries also have storytime or music sessions on that she's the perfect age for right now.

What toys are good for an 11-month-old?

She loves to imitate you so toys that allow role play are good. Babies of this age don't yet play 'with' their peers – only alongside them. However, she'll enjoy presenting you with endless cups of tea (the correct response is always to down it one and exclaim: 'Mmmm! Delicious!') Ironic really, since it's probably nearly a year since you managed to drink a cuppa while it was still warm.

Toys she can walk along with, using them for support are good as she becomes steadier on her feet. Make sure they’re nice and sturdy though, so they can't run away from her, resulting in a fall onto her face.

Putting objects into a container is popular, too, so a tub of plastic farm animals she can 'put to bed' and then tip out onto the floor again will go down well.

Read next: The 15 best baby toys for 6 to 12 month olds as tested by parents

By the time your baby is 11 months old he will probably be doing most of the following:

What else happens when my baby is 11 months old?

Around this time your baby will have her fourth developmental review. You might have missed the first two in the newborn haze as they happen within a few days of birth and then between one and two weeks. Then at between six and eight weeks, she will have the 'six-week check', which also serves as a check-up for you, at your GP.

The next biggie is the developmental check at 9-12 months.

What happens at the 9-12 months developmental check?

This check is usually done by your health-visiting team, and may be at a clinic or at your home.

They will look at lots of things, including language and learning, safety at home, her diet and general behaviour. If you have any worries about your child's development, this is a good time to bring it up.

You'll be asked to asked to fill out an ASQ-3 questionnaire for them, which will help your health visitor assess how your baby is developing.

"With nappy changes, I used to sing or give my son something to distract him (even the odd cartoon via YouTube on my phone) to keep him still. Also make sure you have everything to hand and out of his reach".

"I think this is a trying stage for most parents. If your 11-month-old can walk, take him for one walk around the park everyday come rain or shine. It will really help".

"If you have a baby that whinges a lot, my key survival strategy was to get out of the house as much as possible. And invite people over – especially at meal times – it really takes the pressure off and distracts the whinger".